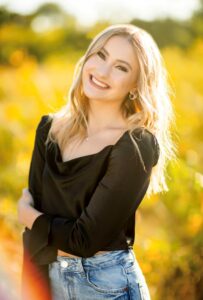 The Ohio Broadcasters Foundation is pleased to recognize Anna Miller as the recipient of our 2022 OAB Kids Scholarship. A graduate of Perrysburg High School, Anna will be attending the E.W. Scripps School of Journalism at Ohio University this fall, where she aspires to build a career in broadcast news.

The daughter of veteran reporter and anchor Tim Miller of WTOL 11 and Fox 36 in Toledo, Anna’s interest in journalism was sparked during her childhood. Her father’s position allowed her to explore the TV studios, be on air, get involved in her community through volunteering, and stay informed about current events locally and beyond.

“I was immersed into the world of journalism from such a young age and the passion I’ve felt since then has stuck with me,” Anna recalls, adding that she opted for local news over cartoons as her favorite form of entertainment as a kid. “The local news was always playing on my living room television… I was simply fascinated listening to the anchors.”

Anna knew she wanted to follow in her father’s journalistic footsteps and got involved in her high school’s newspaper. Anna cites that experience as the final factor in confirming journalism as her career path. “I was taught the power and importance I have in being a student journalist… But the biggest takeaway for me was acknowledging the capabilities I have in this future career,” Anna describes. “I realize how much of an impact I can have on the world.”

Beyond her involvement in the paper, Anna served on her school’s Link Crew, an incoming freshmen mentorship program, and was an active athlete, participating in club gymnastics since age eight and serving as captain of her school’s varsity gymnastics team.

Throughout high school, Anna consistently demonstrated excellence in academics, earning a spot on her school’s High Honor Roll all four years of high school and being selected for the National Honor Society. One of her teachers describes her as “trustworthy, respectful, fair, caring, and a role model for her peers,” and “full of life, laughter, and energy.”

The OAB is delighted to award this year’s scholarship to a future broadcaster and we look forward to seeing her career ahead. “Even though I am a normal girl, who isn’t in any way in the spotlight,” Anna says, “I truly do believe that I have the power to keep journalism alive for as long as I live and for future generations that come.”

About the Ohio Broadcasters Foundation

The Ohio Broadcasters Foundation is the educational foundation affiliated with the Ohio Association of Broadcasters, the not-for-profit trade association of radio and television stations in Ohio.  The OAB Kids Scholarship is awarded annually to a graduating high school senior planning to attend college next year whose parent is employed by an OAB member station.